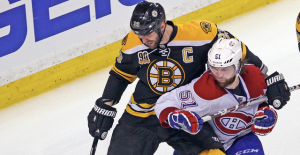 A lot of these thoughts about the Bruins season that just ended came to me after Game 6 of the Montreal series. I started writing but hoped beyond all hopes these words wouldn’t see the light of day.

Maybe subconsciously I thought the Bruins would lose Game 7 after the turd they laid in Game 6. I can’t recall being more nervous about any Boston team’s chances going into a Game 7 as I did the other night. It just seemed really likely everything would come crashing down.

They did play with great effort, almost too much effort for their own good. But stupid mistakes and the inability to finish scoring chances did them in, as it did in all their series losses to a motivated Habs team.

The local narrative is if the Bruins won Game 7, they’d cruise to a conference title against the Rangers and then have the upper hand in whomever they’d face in the Final. But even if they’d squeaked out Game 7, I’m not so convinced the Rangers series would have been a cakewalk.

That’s because I saw things in this Habs series that make me question the makeup of this team going forward, and if they just missed their last best chance to win another Stanley Cup with this group.

There were positives to take from this postseason. Dougie Hamilton legitimately looks like Rob Blake 2.0 and if he continues to be more responsible defensively, the word “Norris” would well be in his future. Despite some shaky moments, the rest of the young defensive core has promise. Carl Soderberg is a bonafide playmaker who could take top-line shifts if something were to happen to David Krejci or Patrice Bergeron. Loui Eriksson finally looked solid after an injury-plagued year. And despite also having some shaky games, Tuukka Rask remains a top five goalie in the league and someone I’m glad the Bruins never gave up on after the 2010 postseason debacle.

But what happened to these guys, who seemed so rock solid in a dominating regular season, a year removed from getting to Game 6 of the Final? I can’t help but feel a lot of it comes down to attitude and a lack of focus when the going got tough. That’s a really tough pill to swallow as a fan, knowing the kind of adversity they faced and mostly overcame in their last two deep postseason runs.

The defensive system the Bruins run is based mostly around the prowess of one man: Zdeno Chara. There’s no other defenseman on the planet capable of making the plays Chara can, based mostly on his physical gifts. It would not be out of bounds to say the Bruins reached their heights these last few years because they just so happen to employ a talented freak of nature as their top defenseman.

Well, even having a long reach won’t halt the longer reach of Father Time. Next March Chara will turn 38. It’s already obvious he’s lost a step, and there’s still four years left on his contract. Whether it was due to injuries or his age catching up to him, Chara was not the Chara of old the last two postseasons.

It’s similarly obvious the Bruins can’t lean on Chara like they did leading up to and including the Cup year. Do you really think Chara will be the same guy he is now in two or three years? That’s why losing Dennis Seidenberg hurt so much this year.

When things work, the way the Bruins play is a thing of beauty. We saw it in several games this postseason. When all four lines are clicking, when the defense is crisp, when Rask is well-positioned, when the skaters finish their checks and fight for loose pucks and cycle on power plays and, yes, intimidate opponents with their physical style, it reminds me of what hockey truly should be: talented guys who can hit, score and defend against any opposing team’s style of play.

This current group is the team they have, with only Jarome Iginla and Shawn Thornton as UFAs while Tory Krug, Matt Bartkowski and Chad Johnson are due RFA raises. Unless GM Peter Chiarelli feels the need to blow things up, this group is coming back mostly in tact next year, with key decisions about Krejci and Johnny Boychuk looming during the summer of ‘15.

I don’t think Chiarelli needs to blow it up yet. There COULD be at least one more year left in this group, but you just never know until you get there.

But, the Bruins need to take a long look in the mirror about the kind of team they want to be.

There is part of me that wonders if several Bruins are more interested in being “Bruins” and all the things that come with that than about working to be the best team. It’s as if they can just put on their Bruins sweater and be great simply by wearing it.

Ask yourself this question seriously, Bruins fans: how will you remember the accomplishments this postseason of Milan Lucic, Brad Marchand and Shawn Thornton, three of the biggest perceived tone-setters for the Black and Gold?

I’ll remember Lucic spearing an opposing player in the unmentionables, flexing his bicep like a moron at another opponent in the middle of a game, skating around aimlessly for most of the playoffs, missing wide open nets every game and making a complete ass of himself by threatening Habs players in the handshake line.

I’ll remember Marchand for taking stupid, cheap, unnecessary penalty after stupid, cheap, unnecessary penalty, practically trying to lose the clinching game of the Red Wings series on his own and also constantly missing wide open nets with shots, making a follow-through pose on nearly every shot to try and look cool while doing it, as if style points would somehow make up for his stunning ineptitude.

Is this what you want, Bruins fans? Do you want to root for guys who pull bullshit like that? Or is that just the way “Bruins hockey” works? Did these guys get too caught up in propping up this perception of “what it means to be a Bruin” and detracting from, you know, actually doing things to win important playoff games?

I question whether or not the Bruins need those guys to win. They need guys who will stay out of the penalty box, finish scoring chances more frequently, stay defensively responsible and not make fools of themselves when the bright lights are shining. Thornton is easily a goner since they can pay someone like Matt Fraser about half what he’ll demand as a UFA this summer.

But if the opportunity presents itself, Chiarelli should find takers for Lucic and Marchand as soon as he can. I would be perfectly fine with never seeing either in a Bruins sweater again, even if it meant only getting draft picks back.

I doubt it will happen. If both are back, it won’t make me root for the Bruins any less. But I can’t help but feel this team won’t be successful again until they move on from players of their ilk, when their core is aging and you only get so many cracks at the Cup.

All is not lost. Like I said, no matter the makeup, the Bruins are positioned to be back in contention next season. But it may take more work and more changes than you’d expect to lift the Cup once again.